My name's Takas Neşeli, but everybody just calls me Maya. My Mum named me that after one of those funny dogs with no scent from the TV. That's an anagram for 'My Amazing Young Anatolian', whatever an anagram is. I'm five years old, I weigh 55 kilos, and I am fawn with a black mask, but I have a white tail tip too. I live with my Mum and Mum's pets in sunny Townsville, Australia. 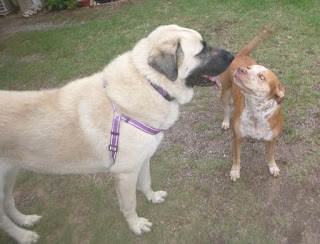 Well the New Year has arrived, and Mum is super happy because there is RAIN about again! For a long time there hasn't been any and the river has been boring because it was all just sand, and where's the fun in that for Summertime? But we actually got quite a lot of rain.


The other day I got to go and visit Grandma's place to play with Goldie! (Also, Grandma is very good for getting treats. Sometimes I get cheese.) We had a lot of fun running around playing Wrestle in the wet dirt. 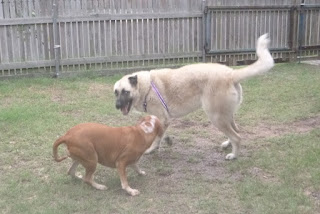 Plying Wrestle with Goldie is hard work because she has so much energy. 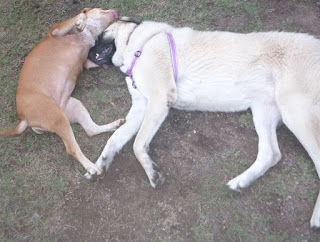 I don't quite know how, but just like magic, this really great hole suddenly appeared in the yard while we were playing.

But I have no clue how it happened. 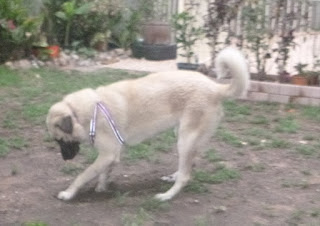 Goldie is pretty good at Wrestle, because she's fast - even though she never catches me by surprise of course because I'm faster.

Afterwards we chilled out for a while watching TV with Mum and Grandma. You need some downtime after a good game of Wrestle, after all! 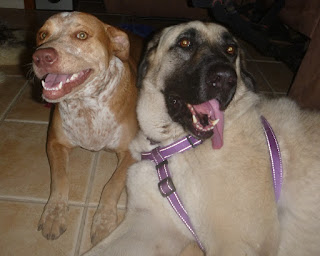 Mum's been pretty busy at Work lately - turns out she's moved to an all new work, a bit closer to our home, so shorter car rides for Mum. But it turns out Mum's old work is still going strong since she took me for a visit there tonight - and in fact everybody from her new work, old work and other works were there too, along with some nice people who'd come to give me pats and attention.

The night was for what Mum says is a 'training night' which I think is a fancy way of saying 'lots of talking'. I didn't mind though because pretty much everybody wanted to pat me, and so I helped out with a lot of presentations. 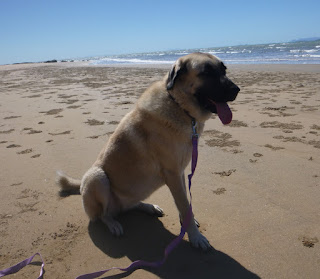 Well though we've had a little rain (mud!) it's still pretty hot here in the tropics. Mum has been a bit sick but she was well enough today for a beach walk! It's the best place to spend time at when it's sunny.

We only took a short walk today since Mum is still recovering, but we had time to have a spa and do some rockclimbing.

Also there was a new sand-dune. Mum says they appear sometimes after lots of wind and strong tides. Caught me a bit by surprise though.

This year is shaping up to be AMAZING! On Friday, Mum started packing bags and initially I was suspicious that she was going on holidays. But then I saw her packing my bag, and biscuits, lead and treats too - it turns out that dogs can come on some holidays! 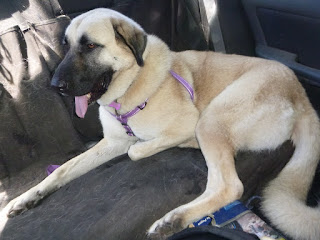 First came a reeeeeeally long car trip. I don't mind car trips that much because the shaking of the car makes it easy to sleep, plus there's always somewhere great for an Adventure when you get out of the car. The first place we stopped was a town called Ingham.


It was great to stretch my legs and have a cold drink after so long in the car, but it was pretty hot - since Mum wouldn't let me swim in this most excellent dog bath, I was pretty happy to get back in the car and have Cold Air on instead. 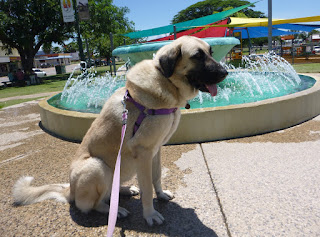 The next place we stopped was called Cardwell. Mum knows it pretty well because she often visited it when she was younger and she lived on a boat. (She says it's a bit different now though). 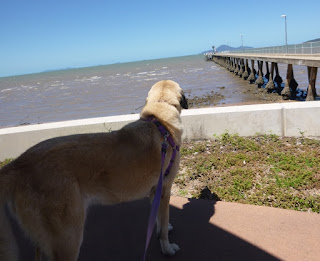 I approved of Cardwell because of this: 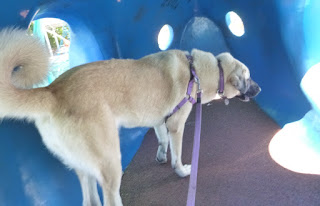 It's a dugong play tunnel! Mum says it's actually for kids, not dogs. Doesn't make much sense!
So we stopped in Cardwell long enough for lunch. (I had a beef ear with liver on it. Yuuum...) Then it was back on the road for the next leg of our Adventure, but I'll tell you all about it next time! 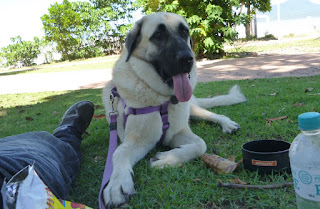 You call THAT a surprise?!

Remember that surprise Mum told me about?


The one I thought couldn't possibly be another brother?

Yeah, it's another brother, all right. And this one is BIGGER THAN ME.

His name is Toby and he's a spotty horse type called Appaloosa. Mum says he wants to be friends with me.

Mum says that just like I have to be nice to Kipper even though he's grumpy and never wants to play Wrestle, I have to be nice to Toby. What good is that going to be? Toby DEFINITELY looks like he'll be no good at Wrestle. Look at those ridiculous long legs! We're not even going to get into that face.
Even Dad is pleased Toby is here as apparently horses mow grass so we will never have to use a lawnmower again.
Mum just laughed at me. "You'll get used to him Maya."
Here it comes...
"Remember, worse things happen at sea!"
Yeah... 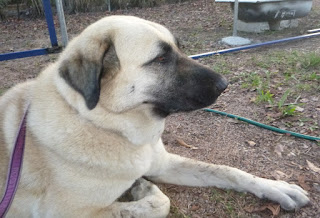 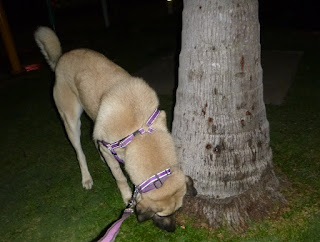 In keeping with our Summer routine of evening Adventures (as mandated by the heat) we went to the Night Markets very last one for the year. It was for Christmas, and Mum did buy some Christmas presents, but otherwise, it didn't look very Christmassy to me! 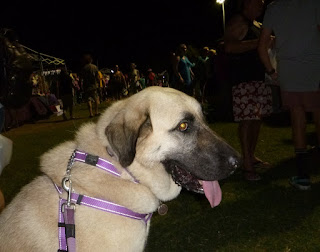 We stopped by the stall of the group who rescued my oldest brother Kipper from the pound - Australian Working Dog Rescue. They were busy raising money to help rescue dogs and showing people how great it is when they adopt a dog, but of course there was time for a photo with me! 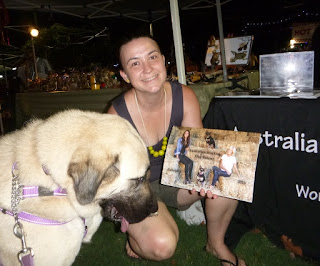 I was very impressed when Mum and I brought a raffle ticket, they knew to put my name on it! (Mum let me use her phone number, though...)
After we said goodbye to AWDRI and we were done with the night markets, we walked a bit further down the Strand - and right at the end of our night, we finally found something Christmassy!

Besides, Mum said this week I get to help her put up the Christmas tree and decorate the house for Christmas! She also says she has a surprise in store... last time I heard the word 'surprise' I wound up with a new, grumpy older brother who never wants to play with me (Yes, that's Kipper... I know he's old and blind and deaf but he really isn't very much fun...) but this wouldn't be another surprise like that.

Our Adventures of late have been largely confined to the evenings - it's Summer again and exceptionally hot. Mum has a pool for me outside and a special cool mat for when I'm inside, but if we go on Adventures during the day we almost melt.


Last night, we had a long adventure. It started with a trip to a place called Bunnings, a human store that dogs are actually allowed inside. Only if wearing a muzzle though...


I did get some pats from the nice staff members though, so I suppose wearing the muzzle was acceptable. After we brought stuff at Bunnings we went to the Strand! It was lovely and cool there because of the wind. I guess everybody had the same idea of coming down at night as me and Mum did, because there were plenty of people there to admire me.

We walked down the pier which is funny at night. It's too dark to see the water, you can just smell it and hear the waves down below. 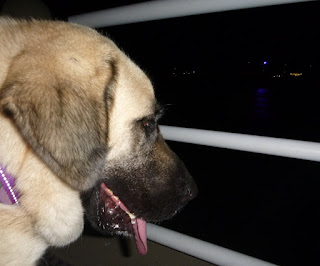 Mum always lets me stop and have a rest break at the Strand. This time I made found a very comfy bed.

After our Strand walk, we stopped by Grandma's place and got some trees. (Mum got cake, Goldie and I got dog treats.)


It was quite late by the time we got home, but I don't at all mind Evening Adventures. 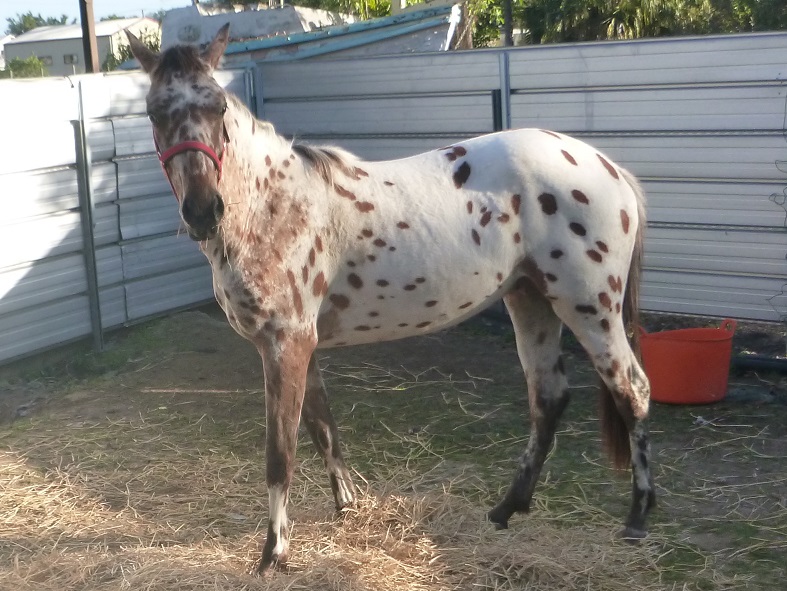 Toby is, quite frankly, the most annoying of all my brothers. He's bigger than me, his bark sounds utterly ridiculous, and he does nothing but eat, sleep and sometimes run around like a lunatic. Mum says it will be good when he is bigger and she can take him on something called 'horserides' but until then I can't really see much use in having a horse for a brother. 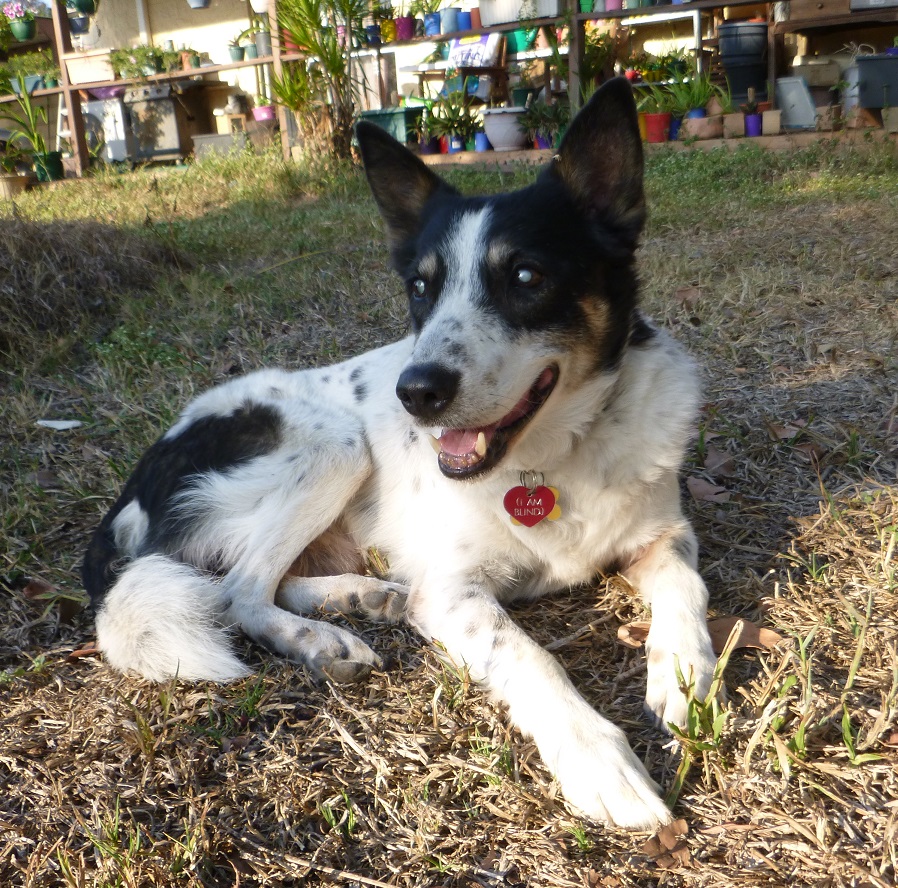 Kipper is my eldest brother. Mum rescued him not very long ago - he's a border collie and is almost sixteen years old. He's not much fun but that's because he's blind and deaf so he never wants to play with me. Mum says I have to be patient and nice to him though! 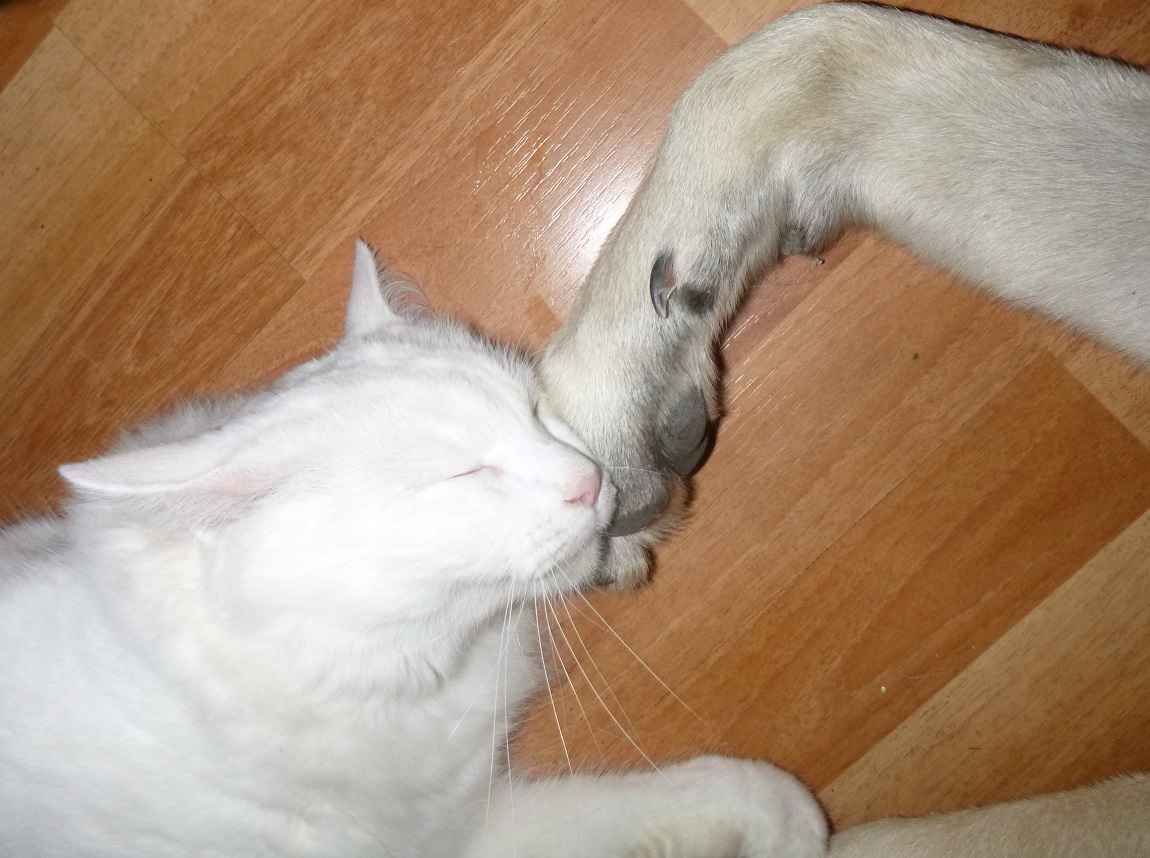 Leo is a cat and therefor he's not really my brother... besides, I have enough of those! But I suppose for a cat Leo isn't bad. I don't know why he's allowed on the couch and I'm not though...

Austin is my very-best-friend. I met him at the dog park before we turned one year old, and we've been besties ever since. Austin might look little, but don't be fooled - he's a big dog at heart. 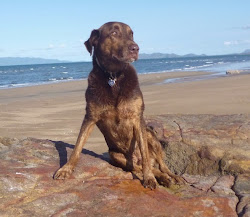 Zeke is my brother! He is 10 years old, and is Labrador cross. He's great company and can be pushed into a game of Wrestle if I bother him enough! When it's cold, he lets me snuggle up with him on his bed. 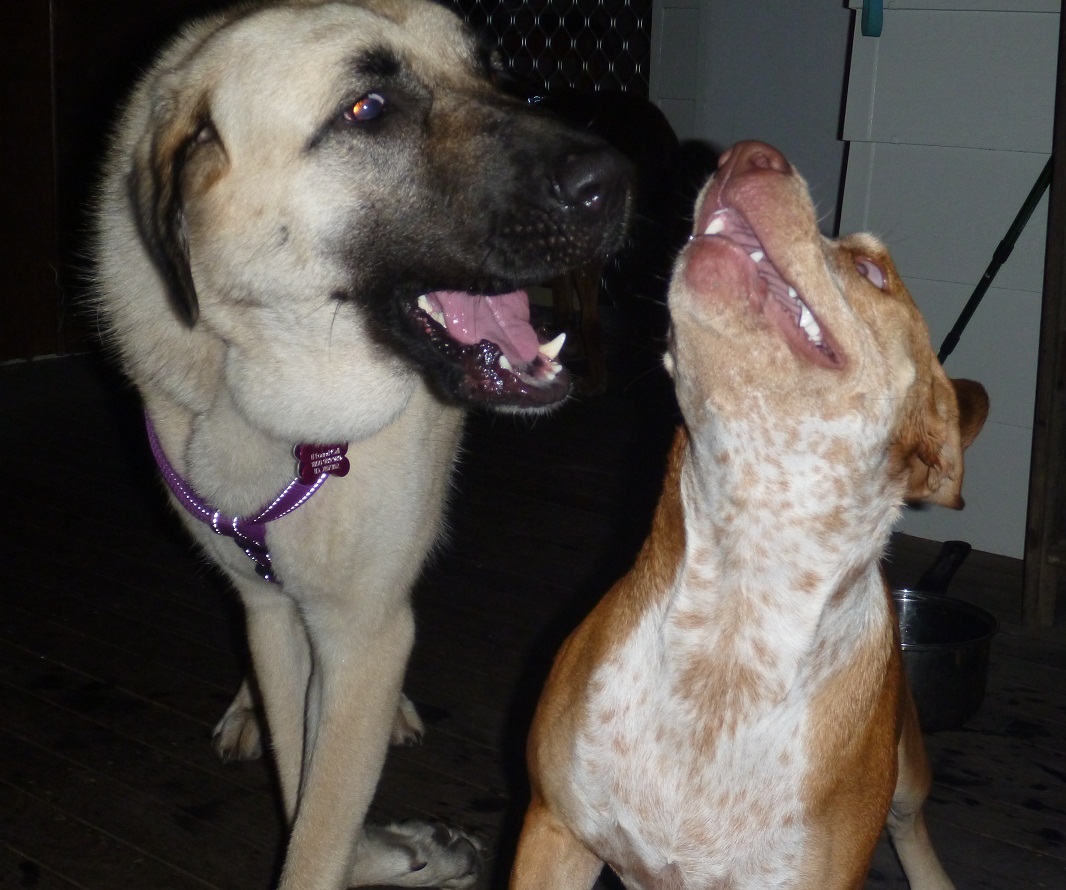 Goldie is my Grandma's dog. She's a mix of lots of breeds, two are cattle dog and ridgeback, I can't keep track of the rest. She is crazy, but, she is good at Wrestle.

My blog has been nominated for an award!